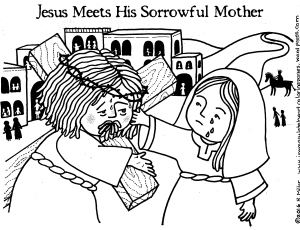 “And now came on the executioner’s servants insolent and triumphant, with their instruments of torture at (sic) sight of which the Blessed Mother trembled, sobbed, and wrung her hands.  One of the men said to the bystanders, “Who is the woman in such great distress?”  And someone answered, “She is the Mother of the Galilean.”  When the miscreants heard this, they jeered at the sorrowing Mother in words of scorn, pointed at her with their fingers; and one of the base wretches, snatching up the nails intended for the crucifixion, held them up mockingly before her face. ”  (Taken from  The Life of Jesus Christ and Biblical Revelations from the Visions of Blessed Anne Catherine Emmerich, Volume Four)

Last summer sometime in June I did a little sketch in my journal of Jesus meeting his sorrowful Mother when He carried His cross.

I have been anxiously awaiting to make a coloring page of it.  Today, I took some time out to make one.  During Lent I always read the Passion of Jesus from Blessed Anne Catherine Emmerich’s visions.  I find her visions such good material for meditation.

One aspect of real love is when we share not only in the joys of someone else, but also in their sorrows.  It is the thing that binds us together.  Our Lady shared in every sorrow that her Son suffered on His Way of the Cross.  No one can love Him more than she does.  She knows all about real love.   Mary, teach us to love your Son as you love Him.

This site uses Akismet to reduce spam. Learn how your comment data is processed.